Can the Dog Whisperer Tame a Lab? 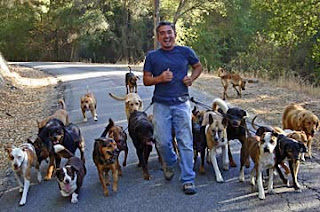 Ever notice how Caesar, "The Dog Whisperer," never has a Labrador with him in his pack? I know that he has worked with a few on his show, but it seems that Labs are not part of his personal pack, at least in the scenes I've seen.

Maybe because Labs are like the kid that gets sent to alternative school because the regular school couldn't get him to conform...

Posted by Colby Willen at 2:57 PM No comments:

Birmingham meteorologist James Spann will be defending his position on Monday night on FNN with Hannity & Colmes and on CNN with Glenn Beck.
Posted by Colby Willen at 8:14 AM No comments:

Global Warming? Not So Fast...

James Spann is a Birmingham-area meteorologist for ABC's 33/40. He has been one meteorologist (there may be others) who has responded to Heidi Cullen. Heidi Cullen's statements at the Weather Channel have raised quite a few eyebrows as she has boldly ridiculed anyone who denies her view of global warming, even going so far as to call for the revoking of their meteorologist certification. Her actual words from December 21st:
"I'd like to take that suggestion a step further. If a meteorologist has an AMS Seal of Approval, which is used to confer legitimacy to TV meteorologists, then meteorologists have a responsibility to truly educate themselves on the science of global warming."

James Spann writes an interesting op/ed that raises issues not only with Cullen's extreme statements, but with the "foregone" conclusion that society has caused global warming. Among the interesting points that Spann makes are the record high temperatures for the month of January in the state of Alabama. In a blog reply he writes: "The warming in recent years is statistically no different from the “global warming” in the decade of the 1930s. Our warmest January temperatures on record in Alabama came in 1949 (81 degrees on January 10), as well as 1932, 1937, 1943, 1950 among others."

One Question in the Debate
What Spann brings up is something that I have wanted someone to address: namely, what about all those other "hot" years in the past? Recently quite a fuss was being made about the fact that NYC had no snow - the latest since some year they stated from the 1800's (let's say it was 1883.) So, my question is: what about 1883? There were obviously warmer winters in years prior to the impact of the industrial revolution.

Average temperatures are just that - averages. Averages are developed over all the years on record (I assume) and then we state that the average temperature for January 19th in Birmingham, AL is 53. While it will actually be fairly close to that today, there really is about a 40-50 degree range that one might expect for a high temperature on January 19th.

Global Warming
As far as the WARMING thing goes, all the facts point to a difference in temperatures now as compared to previous decades. Are we in a warming trend? Yes. James Spann and nearly every meteorologist would agree. Does the earth go through warming and cooling trends? Again, "yes" seems to be the widely accepted answer.

So, what is the cause? It seems that it is too soon to tell. Hindsight may prove or disprove many of the current theories on global warming. Stories may be told about the winters of '01-'07 the way most people talk about the winters in the last '70's being the coldest ones they've experienced.
Posted by Colby Willen at 7:54 AM 1 comment:

Maybe they can pull LOST together in a reasonable way...see this TV Week article. I don't think anyone has been happy about last Fall's 6 episodes that went nowhere. While I certainly don't think that viewer desires should control the direction of a show either, LOST has seemed at times like an unpredictable tornado -no one will ever be able to pick up all these pieces.
Posted by Colby Willen at 7:20 PM No comments:

You wouldn't know that The Innocent Man is non-fiction without introduction. I guess the full title gives it away since novels don't usually carry an extended title, The Innocent Man: Murder and Injustice in a Small Town. However true the account actually is, the book reads more like fiction than fact. Grisham mixes actual facts with some fill-in-the-gaps details that appear to be in keeping with the account he records after much detailed research. As the inside cover reads, the rape and murder of Debra Sue Carter in Ada, Oklahoma, brings about the arrest of two men, both apparently innocent. One of them, Ron Williamson, receives the death penalty.

The book is more about the holes in the legal system than about the actual death penalty, and one comes away somewhat wary of the justice system as practiced in small town America. If anything, the value of a good lawyer is magnified.

True Crime genre books are not in abundance on my shelves, but there is something very intriguing and fascinating about reading something that actually did take place. My preference in fiction writing has always been stories that are real to life with characters who are real people. Hence, I've always made fun of writers like David Baldacci who seems to fill his books (at least the older ones which I have read) with characters who are all virtual superheroes - everyone is beautiful, athletic, and smart.

So, I enjoyed reading The Innocent Man, but it probably ranks pretty low on the Grisham list for me.

Grisham has never been shy about being against the death penalty, something which may have influenced his desire to publish Ron Williamson's story. With The Broker being Grisham's most recent novel and also being a deviation from his classic legal thriller genre, it will be interesting to see if he returns to the type of books that made him famous. I have a feeling that he will continue to branch out and attempt some other new things, although he insinuates in the epilogue that another such non-fiction work is probably not in his immediate interest.
Posted by Colby Willen at 2:41 PM 1 comment:

The new czar of Russia
Posted by Colby Willen at 3:47 PM No comments: