As you may have seen on Google News, the 'Words' blog has gone to a new look. A new 'template' actually...for those of us who are html-challenged (assuming that it is html that one needs to understand to create their own blog website - I could be mistaken.)

In case you've been looking for vast quantities of content here lately but haven't found it, there seems to have been a content leak somewhere in the old blog formatting. Hopefully this newfangled sort will be a little tighter and better able to retain all the amazing content that I'll be posting daily, even hourly on some days.
Posted by Colby Willen at 7:51 PM 2 comments:

A Boy and His Dog 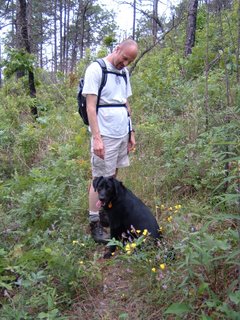 On a recent hike in Talledega National Forest (The Pinhoti Trail.) Celia loves to hike with us. Funny thing is, she can't heel to save her life when we're in the neighborhood, but in the middle of nowhere, she's stays glued to your leg.

We could seriously use a few sessions with 'The Dog Whisperer.' I noticed that Cesar has his own website, too. I used to tell people I was getting my degree in 'pet psychology.' That could have been me...

Posted by Colby Willen at 6:48 PM No comments:

In a word, captivating.

I finally sat down with Blue Like Jazz, the Donald Miller book that has been recommended by several people around me. The other half dozen or so books I'm working through faded into the background while I found myself seeking reading time to get back to Miller's Jazz. I didn't actually gasp or fall out of my rocking chair at any of his theology (we don't agree, but he is gracious and I can be too.) Overall, I found the book a breath of fresh air, very inspiring, and a springboard for some reflection and introspection.
Posted by Colby Willen at 10:50 AM 1 comment:

Barking at the Neighbors

In the same way that my dog barks at the neighbors as if they might be terrorists, people in our society appear to be perfectly confused about what is worthy of protest and what is worthy of respect. The protest over John McCain's speaking at commencement at this institution in Manhattan is only this hour's example of what has been going on with seemingly increasing frequency for several years (the years seemingly following the 2000 election.) Political position has become a variable by which the right to speak on a campus is judged - even when the officials of the campus have formally invited the one to speak, such as at commencement.

Is the demonstration format the proper one to voice the opinions of either a vocal minority or a true vocal majority? Certainly there is a time, place, and certain reasons that offer themselves as protest worthy, but the question concerning whether one agrees with the speaker on his/her main political stances should not be reason to attempt to interrupt their speech. Is there no such thing as respect anymore?

While I would argue that such a tactic is wrong no matter if the situation is conservative protesting liberal or vice versa, the argument by noise and attempt to frustrate and heckle appears to be one that is gaining ground in our society when it comes to opposing those with conservative views politically and even religious. According to the article one of the main issues that was prompting this protest of McCain is his stance on homosexuality. Because he is opposed to homosexuality and was also speaking at Liberty University in the days prior to his appearance at New School.

Even when the TV news spin-off programs air, so much of the rhetoric among the guests on the programs concerning their differing views becomes a contest of who can yell the loudest or speak most quickly. On the format that "fair and balanced" news shows are offering us there is no interaction whatsoever among most of those who are beamed in by satellite, rather there is merely a steady flow of strongly stated arguments for their own positions. The only one who does any interacting with these guests is the host of the show. No one seems responsible anymore for truly answering anyone else's questions.

While I do not believe that it is the news programs that are feeding the protests in question, the common element in each is the lack of any kind of respect for hearing a person's presentation. No one has to answer any questions about whether or not homosexuality is right - they can just show up in noisy masses to shout down the one man who takes a position against homosexuality (even though it is probably not a topic he was going to mention at their commencement!) The battle cry of the left on such issues seems to increasingly be similar to "Might makes right!"
Posted by Colby Willen at 2:20 PM No comments:

Procrastination has met its fiery doom, and thus I've uploaded some photos. I don't know if I like Flickr yet or not, but I'll give it a chance.
Posted by Colby Willen at 8:27 PM 1 comment: