Notice that at Accuweather.com there is a daily trivia question. A few days ago, for instance, the question asked something along the lines of which of these East Coast cities had the least rainfall average for the month of July. Then, as the reader, you are asked to "vote" for Boston, New York, Philadelphia, or D.C.

Voting, however, is by definition an expression of a choice or an opinion. After one 'votes' at Accuweather, the "results" are shown as a graph presenting how many 'votes' each answer has received. The problem is that no matter how many 'votes' any city receives, the answer is a concrete fact. Even if every person votes for Philadelphia, if Boston receives more rain in the historical records, then the answer is "Boston" (or whatever the correct answer was.)

Certainly this is just a matter of terminology at Accuweather, as weather history at least is a matter of scientific record. (Now, weather prediction is a whole other thing...)

If you take a look at the larger framework of factual reporting, such polling has become central to the presentation of the news. News organization are constantly barraging their viewers and readers with poll results than sometimes border on the absurd. You can poll people about whether or not they like to eat cheeseburgers. Polls, however, have no place when dealing with facts. It does not matter how many people 'vote' that Iraq is or is not a threat to the United States any more than we can vote on whether or not men landed on the moon.

Similarly, public opinion has become the supreme foundation for morality. If a CNN poll shows that 90% of Americans approve of stealing, then the viewer is supposed to understand that this is the majority and thus the right way.

Democracy is a great system in which to live, but the modern understanding of opinions has taken over our understanding of truth and facts. We are rewriting reality faster than the Soviet Union rewrote their own history.

When it comes to facts, or when it comes to morality, there is such a thing as absolute truth, and absolute truth is not subject to any vote. If the temperature today is 94, a 99% vote does not change the facts or make it any cooler.
Posted by Colby Willen at 7:23 AM 4 comments:

Read this article about Michael Gaydosh (3rd article on page) and visit his company's website: Solid Ground Christian Books where he is bringing back some of history's great books.
Posted by Colby Willen at 9:18 AM 1 comment: 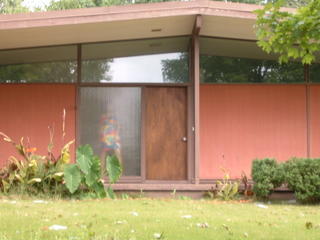 She's always there...in the window in this Birmingham area home between my house and the grocery.


Recently she has been dressed for graduation, she was pregnant for a month or so, and she briefly wore a wedding dress...but she never moves.
Posted by Colby Willen at 7:56 AM 1 comment:

I've just been wondering how the recovery effort is going. It is now 5 1/2 years after the great panic over the failure of every computer on the planet, and I've not seen much in the media about the recovery efforts. This must say something about the resilience of the human race.
Posted by Colby Willen at 11:04 AM No comments:

Scott in Alabama is making the internet a better place over at Scattered and Covered dealing with theology, politics, culture, and sports.

Likewise, I just came across another acquaintance who is now blogging: Tim Ellsworth who is doing sports, culture, religion, politics — all from a Christian worldview.
Posted by Colby Willen at 6:23 PM No comments: