Why I Am Still a Southern Baptist

Every year in the month of June (for some strange reason) I find myself questioning whether or not being a part of the Southern Baptist Convention is best. I get caught up in the negatives and forget the positives. That's why I appreciate the timeliness of these words by Mark Dever. We all need to be reminded often of the main purpose of the SBC.
Posted by Colby Willen at 10:26 PM No comments:

Treasure Map Approach to the Bible 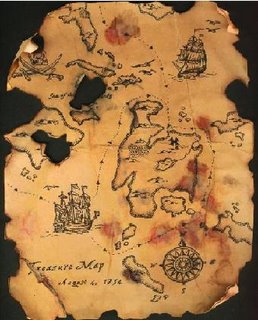 Evidently there is a treasure map in the Bible that humankind is supposed to solve. Treasure Map Hermeneutics views Scripture as some amazing compilation of information that is somehow given in code that we must decipher in order to truly understand things. While this approach seems especially true when it comes to end times, many people approach the Bible as if everything contained in it is written in some sort of secret code - if we can just piece the right verses together and get our charts right, then we'll understand this strangely complex book.

This lesser view of Scripture that has flooded the church borders on the "research" reported in The Bible Code, where computerized analysis "uncovered" hidden words in Scripture. (The same approach also found similarly hidden words in Moby Dick (a.k.a. "The Whale") and could be applied to any sizable text - it is simply a study in mathematics and probability.)

Such an approach seems to be in conflict with an 'authorial intent' approach to the Bible. Interestingly, though, it seems that those who place the most emphasis on Scripture and profess to hold a "high view of Scripture" are often (not always) the ones who also communicate such a system of finding answers "hidden" somewhere in these 66 books of the Bible. The Bible becomes a big treasure map with little clues hidden here and there that, when pieced together, provide answers.

However, for this Treasure Map approach to work then one must also conclude that the inidividual writers of the books of the Bible were very cunning in the way that they presented their material. Matthew must have been joking when he wrote "let the reader understand" in Mt 24.15. Similarly, in Mt 24.42-51 Jesus tells the disciples that they will neither know what day their Lord is coming nor will he come at the time of their prediction.

The disciples prompted the whole discussion in Mt 24 by asking Jesus some questions about the coming of the end. Similarly, it is not wrong for us to seek to rightly interpret Scripture and come to grasp the meaning of the text, and it is not wrong to want to understand the end times.

The doctrine of Scripture is weak in the church today, and I believe this is in large part due to the inconsistent hermeneutical approaches of our trained pastors and teachers. I often say that I believe that the most important class taught in seminary is Hermeneutics. Modeling hermeneutics for those we teach in any arena is as important as the content of what we teach. Without realizing it, we can turn the Bible back into Latin that only the elite few are able to interpret. Let us be careful.
Posted by Colby Willen at 7:15 AM No comments:

The Death of Death?

Birmingham fights back against crime! Well, sort of...

In a procession of church leaders that included Birmingham's mayor Kincaid, several hearses were being borrowed for an event that intended to raise awareness of the problem. From the news blurb:

“We must bury murder,” said Bishop Calvin Woods, Birmingham chapter president of Southern Christian Leadership Conference, which organized the march. “We must
bury drugs. We must bury disrespect. We must turn from death in this city to
celebrating life."

Meanwhile, the city's 54th murder of 2006 occurred near the route to be taken by the procession. The victim, who died later of gunshot wounds, was found in broad daylight.

Posted by Colby Willen at 6:11 AM No comments:

John H. Armstrong makes some interesting points about evangelism and the trend of our culture. He writes


I highly doubt that any form other than friendship evangelism will work well in
our culture in the years ahead. The luxury of “hit and run” evangelism is dead and only the Christian and church that is willing to place friendship at the top of its agenda will succeed in making new disciples for Christ.

It is harder work to be intentional about building relationships and proclaiming the gospel within these contexts. Neighbors and coworkers are our most obvious harvest fields and yet we easily overlook them and think of evangelizing somewhere far away where there is little risk. So-called "hit and run" evangelism seems to produce many once and done "Christians."
Posted by Colby Willen at 4:59 PM No comments:

New Orleans has returned to the headlines, sounding the alarm this week for the National Guard to come help as the city's murder totals for 2006 have jumped to 54. While it seems to be common knowledge that New Orleans was riddled with crime before Katrina, there has apparently been an idea floating about (no pun intended) that this "new" city would be much safer. This article reads, The bloodshed has raised fears that violence is back on the rise in a city that was plagued by crime before Katrina drove out half its population of 465,000. Community leaders are afraid the violence will discourage people from returning.

As a resident of Birmingham, AL, I am always checking the crime statistics here and mapping out where violent crimes take place (none near our home, for those who care.) As I blogged some last year, the city has seen a drastic increase in murders, and as of today the city is 15 ahead of last year's frightening pace...and there is still a search in progress for two grandparents and their 19-year old grandson who have been missing the past few days. If 54 is an emergency number for New Orleans, then what is 50 for Birmingham? (53 unless this missing family is actually alive somewhere.)

Considering the problem in New Orleans, this article presents the idea that these "thugs" are coming back to New Orleans from places like Houston. Nagin said Monday that he believes some thugs are coming home from places like Houston because the judicial system is in such disarray here that they're in less danger of spending long stretches in prison.

Apparently, Nagin only wanted his upstanding residents to return after the storm. Of course, he (and everyone else except Houston) would have been fine with the criminals staying away.

As for Birmingham, the reaction to its own problems is basically no reaction thus far, just the calming rhetoric from the police spokesman:

"It's more homicides than what we would like to see. As I always say, one homicide is one too many," said Birmingham police spokesman Lt. Henry Irby. "We encourage people to not settle their differences through violence and to step away from confrontation when possible."

It seems that of these two cities, the one that should be more concerned is the one that wasn't devasted by a hurricane and has not lost its ability to fight crime. Hopefully Birmingham will wake up before it's too late.
Posted by Colby Willen at 5:24 PM No comments:

Is the snooze button from the devil?

The never-ending list of problems that Christians face and attribute to spiritual warfare seems to always include the problem of not getting up early enough, especially for those who consider getting up earlier a virtue related to the practice of the study of Scripture and prayer in the wee, or not-so-wee hours of the morning. Some interesting questions arise, though, when one considers that people who are not Christians also struggle with getting up when their alarm goes off. This article even refers to a practice that would lead one to get up right when the alarm goes off in the morning - and none of it has to do with anything spiritual (HT: Truepravda.)

So what makes hitting the snooze button a spiritual problem for Christians and just a personal dilemma for everyone else?

First of all, it seems that many times anything less than Enoch-like devotion to God is labeled as some sort of spiritual warfare that must be dealt with by various means as if demons were the immediate and direct cause of any lack of concentration or highest "achievement." The flesh is rarely considered to be the culprit, since even most Christians believe that they are basically good, just needing a little 'boost' to be saved.

Second, there are lessons to be learned by the discipline that people demonstrate in the way that they live their lives, even if they are actually seeking to glorify themselves rather than to glorify God. If a man can train himself to wake up much earlier than his body would desire simply so he can gain some exercise time or reading time or something else toward personal improvement and achievement, then what about the follower of Christ?

Finally, it does seem right for a Christian to take a different perspective on things in life. Believers in Christ are at war with the flesh and there certainly is a spiritual, unseen battle raging. However, a man I know once started to ask a group for prayer that he would be able to devote more time to prayer but then he recanted and said, "I just need to do it." For most people, I don't think that a messenger of the devil has to whisper in our ear suggesting that we hit the snooze button. For most of us, we voluntarily do it because the flesh is king at 5 am.

Interestingly, in his article Steve Pavlina actually writes: "Your 5am coach is no good, so you need to fire him." From a completely secular piece on getting up early, he essentially refers to the flesh and its battle against the mind. He, too, lives in a fallen world. He, too, recognizes the struggle between better and worse.
Posted by Colby Willen at 6:40 PM No comments:

Since we're all basically good and there's no such thing as a sin nature...

"Anger Syndrome Not Just Bouts of Bad Behaviour"
Posted by Colby Willen at 10:01 AM No comments:

Immigration From USA To Mexico

This is a revealing account:
Immigration From USA To Mexico
Posted by Colby Willen at 9:22 AM No comments: