This movie is the epitome of postmodernism meets new age meaninglessness. The Forgotten sets up an interesting plot only to proceed absolutely nowhere with it, providing no answers and hardly any resolution. I've heard people say that The Village doesn't work. Well, The Forgotten absolutely can't work. (Btw, I still think The Village is a smart movie despite its detractors.)Director Joseph Ruben's filmography reveals one good movie: Sleeping with the Enemy way back in 1991, maybe two if you include The Good Son.

The funny thing about renting this movie was that we had a few choices selected at the video store and a young couple saw us looking at The Forgotten and they heaped lavish praise on the movie. What kind of a sick joke were they playing on us?!?!
Posted by Colby Willen at 7:29 AM 1 comment:

Can Congress Save Baseball?

Baseball better make sure that all its prescriptions are in order before the questioning begins. Oh, wait, steroids are illegal. And yet Major League Baseball keeps carrying on as if offended that anyone would bring up the issue:

"Steroids in baseball? Whose business is that?"

Well, its everyone's business...every fan...every player...every owner...the commissioner...and our legal system. The tendency to look the other way has created a monster in sports. We love to see bigger, stronger, faster athletes. They're more entertaining, like watching Gladiator. We aren't interesting in guys the size of jockeys playing football, baseball, basketball, or hockey, so we encourage them to get bigger, stronger, faster. Fans demand it. Sure, there's a place in baseball for the small, agile shortstop and second baseman, but as a whole, we all want to see guys that hit the living daylights out of the ball.

So, as sports fans, we have created the demand for performance enhancing drugs, but now it is going to take an act of Congress, literally, to control these abuses. Things are about to get very ugly for baseball if Mark McGwire, Sammy Sosa, and Barry Bonds are truly discovered to be in league with Jose Conseco. The scarlet letter on baseball's chest is going to be tough to deal with. With steroid abuse so apparently rampant, can the game bounce back from such a major crackdown? If Jason Giambi were to serve as an example, the answer is sadly "no." Giambi's game and physical stature would appear to have suffered drastically from his attempt to deal with his own abuse of steroids.

At this point, it is unclear as to how many players are really involved. Conseco seems like the Dennis Rodman of baseball right now, throwing out big names to increase his own attention (and book sales, of course.) Can the game survive the negative publicity of having mutliple stars tarnished? And what about the stats? A game that historically reveres stats more than any other cannot just turn its head to the fact that players today are destroying the historical records. If Bonds, Sosa, and McGwire cheated, then Roger Maris' homerun record should be reinstated as the mark. If this were the Olympics, that would be the case. Is baseball less ethical?
Posted by Colby Willen at 6:36 AM No comments: 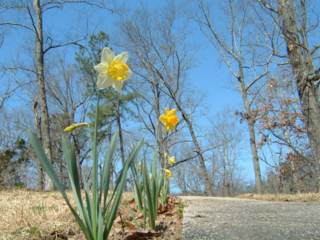 While it is cold and snowing there, here it has been shorts and t-shirt weather. Aaaaa...Birmingham.

Posted by Colby Willen at 6:39 AM No comments: