Paige Patterson and the Southern Baptists

My guess is that 99% of the people out there who call themselves "Southern Baptist" do not really know what has taken place in the denomination over the past 27 years. An even greater concern is that many are completely unaware of what was taking place prior to the changes that began to really take shape in the late 70's. Paige Patterson, probably the most visible figure involved in the changes, has written a new booklet called Anatomy of a Reformation that describes some of the details from his own perspective. Dr. Al Mohler writes about Patterson's work today in his column.

I would also guess that a very high percentage of Baptists who have ill feelings toward the Southern Baptist Convention or who have actually left the convention over various issues do not know the real details behind the scene. On the surface what is often talked about is not really the issue that was boiling beneath the surface. Two other books I would highly recommend concerning the larger picture:

1. Baptist Reformation by Jerry Sutton. This book is a look at various aspects of the changes that have taken place written by Sutton, a Nashville-area pastor.

2. Baptists and the Bible by Bush and Nettles. This book dives into the deeper issues at stake as they concern the Bible and the viewpoints that were being taken by many professors in the Baptist seminaries.

There are others as well, including Paul Pressler's book, A Hill on Which to Die, but the essence of what has happened among Baptists seems lost as the issues which repeatedly surface are merely fronts for the real issue at hand: what is the Bible?

The future of Southern Baptists will rely heavily on the greater majority truly understanding what is at stake and adhering to a truly biblical doctrine concerning the Bible itself. Otherwise, we will all do what is right in our own eyes.
Posted by Colby Willen at 7:43 AM No comments:

Check out this new blog, "Aslan", for some challenging words on the audacity of a Christian and some poetry that will make you think.
Posted by Colby Willen at 7:08 PM No comments: 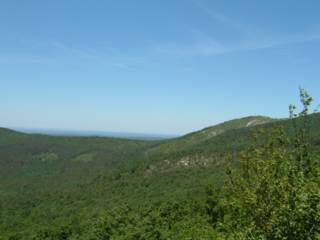 View from the Odum Scout Trail in the Talledega National Forest, Alabama.

Posted by Colby Willen at 7:07 PM No comments:

It has been 13 years since Charles Colson wrote "The Body" and spoke of the McChurch mentality among Christians. For Colson, the problem was the sporadic attendance at various churches by people in the same manner that we choose to eat at McDonald's or Wendy's or Burger King in order to 'vary' our routine.

There is another likeness out there, though, that invites the picture of the 99-cent value menu. People are devoted to their church and to their denomination to whatever degree they can choke down the particular theological position. Being Presbyterian or Baptist or Methodist or Catholic has little to do with the doctrinal statement of the specific church that people attend – they could not care less. The amount of news recently about the office of the Pope just brings such thinking to the forefront. Many Catholics feel perfectly free to pick and choose menu items from the Catholic beliefs the way we choose chili and a junior cheeseburger deluxe. Same goes for the Baptists (which I am) and the Presbyterians and the Methodists and the [insert denomination.]

We are now living in a society in which there is no prevailing understanding of the church's authority in any way. If the church is against a couple living together out of wedlock, people just ignore this facet of biblical teaching. The even stranger aspect of such predicaments is how many people keep attending and participating in church even though they disagree with what is being taught there.

One explanation I can suggest for this is the false understanding that there is some spiritual merit in attending church that achieves better standing with God. Many people, especially in the Bible Belt of America, view church as 'good' and believe that there is a need to attend church in order to achieve a better status in the eyes of God. Church 'membership' becomes the 'get-out-of-jail-free' card that brings security to individuals. Lost is any sense of gathering to worship the God of creation, the Author of salvation, the very God who has revealed himself in Scripture.

The church is also to blame. Churches have moved to such a place as to value numbers and size so much that they are willing to compromise everything else. Not only is such thinking an injustice to the people who can attend and not hear the gospel of Jesus Christ, but it is akin to the false prophets of Jerusalem who would continually prophesy peace and good while men like Jeremiah were declaring the true message of God. Not only do so many churches water down the content of their teaching, but they seemingly promote the membership role as a God-ordained list. Do churches not teach such easy and faithless church membership when they seemingly require nothing of anyone besides a desire to join? With so little emphasis on truth and so little accountability to any particular church, it is no wonder that people feel fine having their names on a list even though they rarely attend and certainly don't consent to the church's statement of faith.
Posted by Colby Willen at 8:05 AM No comments:

As for Senator Harry Reid's comments about President Bush, calling him "a loser," the statement falls into a whole new category, not only of demeaning the elected president of the United States of America and the office in general, but also of demonstrating such an immature and impolite character as to embarrass the entire country. Kids call each other such names. Has our society fallen this far, or is Reid an exception?
Posted by Colby Willen at 9:52 AM 2 comments: